Body of a Poem—Passing: A Hybrid Form

You are here: Home / Archives / Featured / Body of a Poem—Passing: A Hybrid Form

a. To exceed in excellence or worthiness; to surpass in some activity, quality, or degree.

The nonbinary twenty-something rests their hand on their waist. They look at the contrast of their bra to their boxers to their nail polish. They have excellent hair, long and wavy. The nonbinary twenty-something is unlike other genders in that they have perfected the trades of both genders in an attempt to disappear into the hormonal flux of difference.

b. To exceed in number, measurement, or amount; to surpass (a person) in wealth or number of possessions. Also (in early use): to be older than (obs.). Now rare.

The chameleon changes its cellular structure to reflect different wavelengths of light from its skin. Its two layers contain nanocrystals, millions of them in countless shapes and sizes, that make up iridophore cells.

The nonbinary twenty-something is only one person. They are not wealthy. They are not rare. They exceed in measurement only in that when their body grows, they appear more feminine. They do not pass. They are aware of this.

The hybrid writer has millions of letters sprawled across a screen. They pick from them and arrange them in a semi-sensical form.

2. trans. To be beyond the range or compass of (a faculty or expression); to be too great for, transcend.

The nonbinary twenty-something reads CAConrad’s “Gender Continnuum” alone in their bed. He writes to Anne Waldman about Eden: “…Day seven was male, but days two through six were variations of our world. The aim of physical, political, and sociological outcomes were in constant flux days two through six. Margins were permitted to drop in meditation. Permission to drop margins is an exceptional space to offer yourself and others…” The nonbinary twentysomething

Scientists are not sure if camouflage is always effective for animals showing regular variation in appearance.

Scientists are not sure because they have not tried.

Animals who vary in appearance among their own species choose to camouflage against something most close to their own individual appearance. Some animals, like the Japanese quail, hide their eggs where they see optimal safety. Some animals, unaware of their own evolution, hide where they are taught to hide, though they differ in physical appearance from their teacher.
These species are endangered.
These species are dying out.

underneath or
beside.
They do not know the rules
they have somehow overstepped.

4. trans. To go beyond (a point or place); to overshoot (a mark); to rise above, surmount. Also: to outrun or outdistance.

a. To excel, to be superior, to have greater authority, be dominant. Obs.

b. it passes: it exceeds all ordinary limits; it surpasses everything it defies description. Obs.

It passes, the hybrid writer thinks as they submit a poem to a poetry-only journal. It’s got all the elements of a poem, they argue. It can be described. It is within ordinary limits. It surpasses something.

II. To proceed, move forward, depart; to cause to do this.

a. Of a person, or a soul or spirit. to go to one’s spiritual destination. Chiefly with to in to pass to God, to pass to Heaven.

The nonbinary twenty-something reads about bodies of two souls. They do not necessarily feel they have a binary soul. They do not necessarily use the number two to describe their gender. They have yet to perfect the act of camouflage because they can’t decide if they want to be the lizard or the rock. They wonder if God could have stopped at Adam, if the garden could be a solitary inhabitance. There are so many spirits in a garden, they think. The lizards, the birds, the ants. 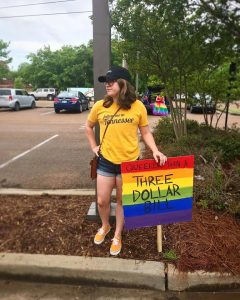 JENNIE FROST is a poet from Maryville, TN. They are an MFA candidate at the University of Mississippi and former writer-in-residence at Sundress Academy for the Arts. Their work has appeared or is forthcoming in The Normal School, Crab Fat, Border Crossing, The Fourth River, Rogue Agent, Stirring, and more. They are a dedicated member of the LGBTQ+ community and a human rights activist focusing on sexual assault prevention.