Body of a Poem: Multiple Voices

You are here: Home / Archives / Featured / Body of a Poem: Multiple Voices

Writing about identity is a pressure for me as a person of color, a queer person, and a queer person of color. So often it was expected that I should write about identity. I remember being asked why I didn’t want to write about these issues I face, that I had an endless bag of stories and perspectives that would be useful in the beginning of my journey to be a writer. Paraphrasing, but I responded I live this every day, why do I need to write about it.

I don’t belong into any single group, but now I feel like it’s more socially acceptable to not. I was brought to the word intersectionality about a few years ago, when I was asking about how the hell I’m supposed to write about being Japanese, Jewish, queer, and the gender I didn’t know just yet. Being labeled “tom boy” because I wanted to be tying knots instead of selling cookies; being labeled a “dyke” when I was talking to a trans boy on the internet about how it feels to take T. I wondered about my gender presentation, if I was presenting in this manor because I was comfortable, or if because it was the safest and most comfortable thing to do in my position. I’m not a gay man, or a man, or a woman, or a gay woman, I’m not within that binary and every time I think about what label to give myself, I just can’t.

I feel an appreciation for femininity when I wear my make-up, or bras, or a dress with some boots. But it doesn’t make me feel like a woman, nor do any of these materials make a woman a woman. It’s coming from a masculine appreciation that I wear what I do, that I present in the way I do. It’s been difficult to come to the conclusion that I will present in the way I want to and identify in the way I want to. The sense of guilt that I may be “lying” because of the way I present is far from the way I identify holds heavy over me. I have to remind myself every day that it is not anyone else’s decision to who I am, and that I am okay, however it doesn’t stop those around me confused as to why I don’t look like a more androgynous.

I took a lot of time throughout my undergrad proving that I was doing something useful with a major like creative writing. So many times being told “Oh don’t say that! It’s useful and valid!” but I mean it in the most loving way. I wanted to do everything I could to learn as much inside and outside of the classrooms. Mainly the outside part, doing extra workshops and volunteering in programs. I did a residency called Writing in the Community provided by the University of Arizona’s poetry center. I taught a poetry workshop once a week for a class of 5th graders. In this time, I worked with a number of amazing people, including the Tucson Poet Laureate T.C. Tolbert.

While in this residency, I had to pick one of the teaching mentors to interview and I picked T.C. since we had worked together the most. Whenever I’m in the presence of a writer who comes from any marginalized group, I tend to ask the question “How have you dealt with tokenism versus being a viable asset as a minority poet?” He answered, “I guess I feel the idea of tokenism is on the other person… I’m going to use this opportunity to really sort of further awareness of trans people and trans issues outside of me.” I worked for the graduate literary magazine Sonora Review as an intern reader in poetry. I did the internship for a year and a half, and through the internship I’ve been given such an insight to what a future MFA would look like for me.

During my first semester at Sonora, Lily Hoang came to sit in on a meeting and answer questions. I remember the only people who were speaking were the facilitators, everyone else in the room was dead silent. I asked her, too, how she viewed tokenism versus diversity in the literary world. She answered, that she felt like there was a pressure often with publishers who wanted her to write more about her ethnicity into her work, and solely focus on that. She said that she would refuse when she didn’t want to, saying that her work should speak for herself and just because she has this identity, she shouldn’t be forced to wear it for the sake of sales.

I think about this question a lot. I’ve been able to ask well known poets and writers, coming from intersecting backgrounds much like myself. I go through my work and think if I use my white father’s last name, will people would think that a white person wrote what I did. When I use my voice in identity politics that I feel this weight that I’m the voice for an entire group of people I don’t fully belong to.

This may not be entirely about my gender, or gender in a general perspective, however coming from an intersecting background every last bit of me plays a role into my nonbinary self. In Japanese culture, gender norms may differ from America with a more celebrated femininity though they are still just as strict as the norms we have here. My family has accepted my queerness though gender is a much, much more difficult topic to discuss. It still is a very hushed topic, much like mental illnesses are in Japan.

We talk about intersectionality as more of a list than a literal intersection. How these identities are not just pieces side by side to create one picture but rather a mix of ingredients to create a unique and interesting taste. I can’t isolate one part of my identity in order to please my writing, it cannot be split or else it would no longer be who I am.

To answer my own question, “how have you dealt with tokenism versus being a viable asset as a minority poet,” I say that I refuse to mold myself to the shape a publisher may want me to be, though I understand that with my platform I have many voices I use to speak with. And yes, I can use my identity to put my foot in the door but my voice will be loud enough that even if they try to close it I will still be heard behind that door. 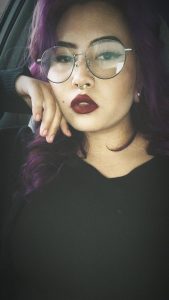 JULIA KINU is a poet from many backgrounds, claiming them all proudly in their work. Their upcoming chapbook, Ojiichan Omiyage, discusses the hardships of being a first generation American with the complexities of their personal relationships with a motherland they are not familiar with. They thrive on dismantling the submissive Asian dream while offering new perspectives from the numerous backgrounds that they embody. They host a monthly POC poetry night at the Owls Club, and are the co-director for the Tucson Poetry Festival.