Body of a Poem: La Loca

You are here: Home / Archives / Featured / Body of a Poem: La Loca

I remember it like it was today because it was yesterday, maybe this week, this month, or I’m not sure. I remember a group of white women accusing a group of women of color and a non-binary Boricua of being lazy, saying, “Where were you? We didn’t see you calling your senator to defend Planned Parenthood,” saying, “clearly these are people who have no idea what sexual assault is,” because we said “fuck you” to a ‘feminist’ editor who supported a known rapist. I remember how this same man used to work for Jezebel defending white women against angry WOC. I remember that, when he was finally called out, no woman of color received an apology from the magazine, or all the white women who defended it.

I remember being sexually assaulted.

I remember taking my friend to get an abortion in Puerto Rico when I was 20, never having gone myself; going because, being from a religious family, she had no one else to support her. This was one of two clinics in San Juan, and neither was Planned Parenthood.

I remember how during the early 20th century one third of Puerto Rican women were forcefully sterilized, how “for their own good” they were told it was temporary, and how time is funny that way, and trauma stays for so long, for generations.

I remember this was the time when being a brown or Black woman meant you weren’t a woman, and thereby no one needed your consent—was that yesterday or today?

I remember not being a woman, but getting read as a woman because what is femme here is not femme in Puerto Rico, because I am racialized when I’m misread as a woman, and gendered as a Boricua, when someone needs to fill the angry, jealous, crazy Latina girlfriend role.

I remember how, after readings, so many people thank me or say my work is good, but after a while, a radius of fear develops. “What will they do? Where will their anger fall?” By “they” I mean myself. By “they” I mean the white people. I start feeling like something is broken in the machinery that mediates my relation to this word. I start feeling like, again, I am dislocated, and I think of the video I saw—was it this week or two days ago? I dunno—of Puerto Rican students and professors protesting in front of a line of cops yelling, “¡Somos ciudadanos, no somos criminales!” (We are citizens not criminals”), getting beaten and maced. I remember thinking we have been citizens since the Jones-Shafroth Act, but always criminals to the nation that forced us into citizenship. I remember thinking how often I’ve been told I’m too loud in the US, how my friend Carina wrote a piece about the loudness of Latinidad Caribeña and I cried, but mostly how that loudness registers so often as silence: the call I never got before the rumor, the text I never got before the third party vote of no-confidence.

I remember that when you are on strike you don’t have time to revise, you’re thinking how best to win, how to keep the cops from forcing you to open the gates, or who might be a snitch. I know the people there in that line pushing back against the cops and screaming had no time to think about things like, “How loud am I?” “Is my white friend crying because they couldn’t bring themselves to ask a direct question?” or “How is everyone today?”

I remember going to therapist after therapist and finally finding one who understood a fraction of what I meant. She wasn’t white and she changed professions when Trump was elected. I remember understanding, and thinking, “I wish we could just change this profession, this profession called representation.”

I remember poets talking about “careers.”

I remember a friend writing an incredibly articulate piece about the use of the n-word by a non-Black poet, about racism, reading it (was it yesterday? today?), and how another poet followed with a poem containing racial slurs. I remember thinking, “Is this a failure? What constitutes a failure? Is a failure the moment when a part of you dies, the part that trusts and believes you will be heard?”

I remember a white friend from a middle class family, making fun of my use of the non-binary “x” in Spanish. I remember laughing because I didn’t know how to respond. I remember backing away from the friendship, and wanting not to trust anymore, to just rest, dance and not have to trust anyone white anymore, not have to see them, talk to them, or look at them. This was a kind of meditation, the way some people envision empty fields, or the ocean. 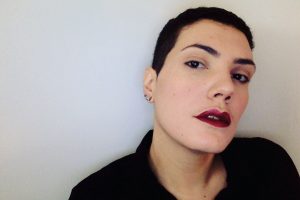 RAQUEL SALAS RIVERA is a Puerto Rican poet, translator, essayist, and educator living and working in Philadelphia. They have published poetry, translations, and essays in numerous anthologies and journals, and as well as four poetry books: Caneca de anhelos turbios (2011), oropel/tinsel (2016), huequitos/holies (2016), and tierra intermitente (2017). Currently, they are a contributing editor and translator at The Wanderer. If for Roque Dalton there is no revolution without poetry, for Raquel there is no poetry without Puerto Rico.