Body of a Poem: If language makes us visible

You are here: Home / Archives / Featured / Body of a Poem: If language makes us visible

“I swear, you will wake—
& mistake these walls

I don’t like to think of my skin as a wall but, it is. It’s also full of holes. I make an escape hatch out of a hole.

I like to think of language as a way to write a thing that is less of a wall and more of a hole. A place to pour things that are unseen; a way of challenging vision as the primary sense used to read and do gender, do race to people. But it is also a wall.

I’m still not sure if language is a way or a hole or if it’s just a layer on top of a thing.

The way that gender is done to my body as a visual system means I am often misread, which has also been theorized as invisible.

A question I have about writing about the way I see myself is if language makes the invisible visible. I think this is a question.

You would not know the way I see myself unless I told you.

Language is a request to be seen differently than the gender I was assigned at birth. Usually this happens via the use of the pronoun they. The androgens I used to take included a steroid that blocked secondary sex characteristics, so my HRT was invisible. Then, the low dose of testosterone I used to shoot wasn’t enough to make anyone guess that the way I see myself is any different than girl. Unless you see the scars on my chest, my body as surgical record is invisible. But visibility is not a cure for queer bodies.

Brands are hungry to make us visible. Miss Major Griffen-Gracey, Reina Gossett, and Juliana Huxtable have all argued that trans violence is a direct backlash of trans visibility. Seeing trans people being celebrated causes transphobic responses.

…from what I have observed through my historical research, the two (visibility and violence) seem to follow hand in hand.

…what’s interesting is the way visibility is being used to sabotage actual engagement with real questions of structural negligence and discrimination.

Another trans woman pays the price for what the media is applauding.

What happens if we write the invisible? Does that fix the problem of visibility as violence? Writing can make something visible. But still, it’s only a signifier for an embodied practice or process that may still be invisible.

Donna Haraway’s essay “The Persistence of Vision” argues that vision can be used for avoiding binaries—even though it’s been used to naturalize (hide) white cis male able-bodied supremacy. She says she wants

“a feminist writing of the body that metaphorically emphasizes vision again…in dimensions of mental and physical space we hardly know how to name.”

Writing about the unseen, based on what is seen about my body, feels parasitic. Like I am feeding off the body I do have.

When we emphasize the invisible, are we writing a refusal to pass as falsely binary beings? Writing our refusal to be pathologized? A refusal, as Frantz Fanon said, to have our bodies overdetermined from the outside.

I collected the words she told me:

You are not fighting anyone but yourself.

Know that I love you as I always did and that I am aware that at any time any of us can be gripped by some crazy ideas—the state of the planet shows that collective insanity is the norm.

There are just some questions that you could pose to yourself IF the direction you want to take is growth and oppose the solidification of your current state of mind.

I tried to explain what I needed. I minimized my plans and maximized my discomfort. When all those strategies went wrong, I stopped talking to both of my parents. My mother matched my silence. My father wrote to me. I collected the negotiations & insults:

You can wait … and you can do something less extreme if you must do something now, and something that we feel is much much more reasonable.

I want you to ask yourself what you say to your friends, what boasting you may be making about cutting off your breasts, and the like, that would sound powerful and out front of the pack, showing the way … and putting you in a position of not being able to change your position because it would cost you if you lost face with in the trans group you have become totally involved with and taken by.

You are more a seller than a seeker of truth, and I think you should be willing to see that in yourself, especially in an issue of this magnitude.

My sister told me she had a surgery scheduled for the same exact day as I did. Hers, on the same region of the body. Hers, for gender.

Then later, my sister told me my parents planned to call the Department of Education to turn me in for fraud for using my FAFSA loans for purposes other than education.

My family cutting me out was the first surgery.

People talk about writers who wields their language with surgical precision.

The word they is as imprecise as it gets.

The plurality they evokes the multiplicity of gender.

One is not a single body because one doesn’t ever own one’s body. You never really own your body when you have a family. This might be why it’s hard to believe yourself sometimes.

To desire a different body or a different language is hard because to want anything is hard.  It’s easy to slip into a half-life.

Desire can escape out of a hole but it can also can be buried in a hole.

It has the very powerful ability to disappear. 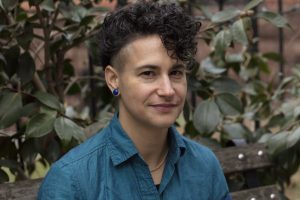 YANA CALOU (they/them) is a Brazilian-American organizer and writer living between Brooklyn, NY and Abiquiu, NM. Their work appears in Foglifter, Gaslight, Hematopoesis, and No, Dear. Yana is Lambda and VONA fellow, and supporters worker voice at Coworker.org.

This piece is part of a series about the unique experiences in the literary world outside of the binary. As VIDA expands The Count to include marginalized genders that may not fit neatly into boxes, this series encourages writers to refuse to let our stories be left out as we fight against cispatriarchal discrimination and erasure and imagine what gender equity looks like for us.