Body of a Poem: From Zines to Novels, Genderqueer on the Page

You are here: Home / Archives / Featured / Body of a Poem: From Zines to Novels, Genderqueer on the Page

I began writing as a zinester sixteen years ago, just days after I ran away from my abusive childhood home. I discovered zines, self-produced publications often photocopied utilizing mixed media pairing written word with cut/paste imagery, about two days before I wrote my first one. This, to me, is one of the most beautiful parts zine writing–you simply are able to join in.

The first zine I was part of writing was created by the Rural Oregon Queer Youth support group, where I was active in my senior year in high school. The story that I wrote was about Kraft Macaroni and Cheese (my favorite food), coming out, being beaten by my mother and running away from home. Zines were the first place I saw stories like mine reflected back at me–stories of the kind of queerness: chosen family, kink, and gender fluidity that was flourishing in the youth centers where I found and built family. Zine culture, as I found it, was filled with weirdos who were not waiting for an invitation to the literary party–they were telling their stories in all their messy, sometimes misspelled glory, and I wanted in.

When I started out, my writing circle was made up of other homeless youth, survivors, and runaways. We wrote our stories for one another creating work by and for our little broken queer community–we showed each other our scars on photocopied pages, hosted zine releases in punk house basements and feminist bookstores–naming our truths, our secrets, our passions, our fears, and our dreams. I am the kind of author I am today because my writing was incubated in zine culture.

Zines gave me control over the way stories were told. Queer lives/bodies/relationships could be presented without being sanitized. Zines are an ethic and an aesthetic of truth telling without censorship–naming that the red editorial pen so often becomes a gatekeeper for marginalized voices. In zine communities, I found other gender freak weirdo writers who were doing gender our own ways. Zines by their very nature give space for fluidity, exploration, and ownership over the process.

In 2010, I made a jump into traditional publishing. I felt a little like a sellout, but had realized I wanted something different, not better, just different for my writing. My main reason for shifting my identity from a zinester to an author was about the reach and ready accessibility of my stories.  I wanted lonely queer kids in rural towns to be able to order my books off Amazon (even though it’s evil) and for queer folks to be able to find my books on the shelves of their local library. Desire for connection is the biggest inspiration for me to keep writing. I write the kinds of queer stories I have always been hungry for, the complicated, messy, kinky stories rooted at the margins of queer culture: runaways, leather folk, created families, and asexual folks all feature prominently in my creative work, and at the forefront are an array of genders. It is not enough to write an interesting story. A story needs to bring forward the kinds of queered lives/bodies/communities/identities/relationships that have sustained, saved and bettered my life, and for me that is about centering gender diversity on the page.

Building a career as a genderqueer writer has its challenges, especially with my books that have been released from publishers less intimately connected with queer community. I’ve had to give ultimatums to publishers that didn’t want to respect the pronouns of my characters. I’ve had to tell them either the pronouns of my characters stay, or I would walk away. For me pronouns aren’t something I will compromise on, representation is far too important. My scrappy literary roots as a zinester definitely gave me the confidence to be ready to walk away from a book deal for the sake of preserving the use of non-binary pronouns in my work.

But it isn’t always just my characters who get misgendered. Last year, I was presenting on a queer panel at a large national literary conference. The day the program was announced, the panel facilitator emailed me concerned about my bio. Between the time I had uploaded my information into the presenter portal, and the time the schedule was published, someone on the back end with the conference had edited my bio, changing my “ze” and “hir” to “he” and “his.”  To the organization’s credit, within a couple of hours of emails, public call-out tweets from me, the support of other panelists and the organized caucus of LGBTQ writers involved with the conference, my pronouns were fixed, and a private apology was sent. The confusion had been they were only familiar with “they” as a non-binary pronoun option and someone had assumed my pronouns were a typo but didn’t bother to check.

Anytime I get a negative review (and yes, I always read the reviews) that says my novels are challenging to read because of all the characters’ non-binary pronouns, I get a little giddy, because I know on some level I’ve done my job. I’ve written a book that showcases the kind of gender language diversity that I came out into as a queer youth, and even for the reader who had to work harder to understand my book, they still got practice engaging with queered language. Although I primarily write books by and for queer readers, I appreciate cisgender and straight readers pushing themselves to understand my work, and the worlds and subcultures I represent on the page.

For me, writing is a politicized act. I have found as a queer author, when I decide to play in mainstream literary worlds, I need to be prepared to educate and prepared to pick up my books and go home. A literary foundation that started with years of zine writing and having queer identities and pronouns normalized in those spaces gave me the framework to unapologetically expect this kind of representation everywhere. I want my work to push readers outside of their comfort zones. Writing stories by and for genderqueer/queer/trans readers is at the forefront of my writing priorities and I center that in every book decision that I make and writing stories for my community is far more important to me than traditional literary “success.”

I made the decision to self-publish my first novel Roving Pack in part because publishers were concerned the content was too edgy. I had no problem finding a home for my second novel at a traditional small press. My background as a zinester meant I knew that there was an audience for my work, and so I wasn’t willing to accept “no” from publishers who thought I needed to “tone down” the leather–instead I was able to show the existence of that readership and  find the right literary home for my writing.

My most recent novel, Lost Boi–queer/punk/leather retelling of Peter Pan, released from Arsenal Pulp Press in 2015, very much sits at the intersection of my literary experience–keeping all of the queer kinky content, while  being able to have all the benefits of traditional publishing, which meant wide distribution across North America and beyond. I then chose to self-publish a novella, and I have a queer political nonfiction book coming out from a large traditional press next year. Being a zinester gave me the confidence to advocate for my stories, and to strategically decide where and how my books would be released.

I write in service of the genderqueer communities that saved me as a runaway homeless teenager. These stories, these books I’ve written are a gift to a community that has been my home and truest family. Readers tell me they feel alone, and isolated but that through the pages of my book for the first time they see their queered lives, pronouns, relationships, bodies, and families come to life. That’s the best compliment I can receive. Writing queer books for queer readers is about building our worlds on the page–it’s about connecting to readers by writing our queer lives/families/relationships the way we have lived them. In this changing and terrifying political climate, writing is an opportunity to break down the barrier between the writer and the reader, to connect, mobilize and inspire. 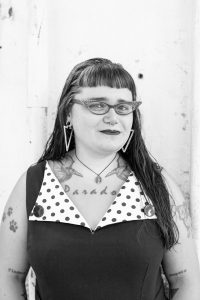 SASSAFRAS LOWREY is a straight-edge queer punk who grew up to become the 2013 winner of the Lambda Literary Emerging Writer Award. Hir books—Lost Boi, A Little Queermas Carol, Roving Pack, Kicked Out, and Leather Ever After—have been honored by organizations ranging from the National Leather Association to the American Library Association. Sassafras lives and writes in Brooklyn with hir partner, and their menagerie of dogs and cats.