Lately I’ve been sort of binge reading poetry. I have Sad Girl Poems by Christopher Soto, Vintage Sadness by Hanif Willis-Abdurraqib, Night Sky with Exit Wounds by Ocean Vuong, al youm by George Abraham, and Portrait of Alcoholic by Kaveh Akbar on my desk, plus any Jeanann Verlee I can get my hands on. I’ve also been reading submissions for Black Napkin Press’ chapbook contest and am very excited to hopefully share some of these manuscripts with the world. I’ve been watching a lot of shonen anime lately, it’s kind of been a staple of mine since I became disabled, the vicarious experience of that physicality. I could list poets all day that people should know, but here’s just a few: Linette Reeman, Noor Jaber, Liv Mammone, Siaara Freeman, and Black Napkin Press managing editor Nicole Connolly. I love doing collaborative work, earlier this year Linette and I co-wrote a piece that I really adore and am trying to place. I would love to work directly with fellow Bettering American poet George Abraham, I think they have a really unique poetic logic.

Do you feel that your writing is assumed to be autobiographical? How do you feel about this assumption? Does memoir play a role in your poetry?

I think, maybe more so than some other poets, this is a fair assumption about my work. I have rarely been able to write pieces that step outside of my own experiences. Even the few persona pieces I have generally use their subject as a lens to aim back upon myself. But this is a place I am comfortable in. Memoir is my way of enacting my past in a new way, a sort of revisionism. To simply tell my story in plain speech makes people uncomfortable, but when I weave childhood abuse, surviving sexual assault, gender based violence, and sex work into something beautiful, a person is willing to engage with what these experiences make them feel beyond the surface level pity or revulsion that is so common. In a lyric essay published in Muzzle, Jeanann Verlee talks about her relationship to the violence in her life and a poem she deeply loves, and encapsulates my feelings on memoir and reframing violence more than I probably can, saying “Once, a friend showed me a poem about magic… Where the massacred sing and go on singing. Where the tormentors learn to listen. Once, a sweet goat’s severed head reminded me how to sing. How to haunt.”

Being as young as I am, I often feel unqualified to answer this question. Particularly when there are teenage poets like Christina Im, Daniel Blokh, Jasmine Cui, Khaya Osborne, and Logan February even younger than me out there doing such amazing things. But I will try. If you really want to be a writer, remember that writing is your work, even if you have to spend 40 hours a week doing something else to eat, this is your work. Don’t let anyone talk down to it, or take you away from it, you only improve through dedication to your craft, write and read constantly. And most importantly, remember that if you earnestly work to improve constantly, your best poem now will one day be so far behind you it will resemble dust. The best piece of advice I’ve ever received as a writer comes courtesy of Kaveh Akbar. When I asked how to deal with failing confidence in my work he said “That’s when I throw myself into reading and allow the voices of my forebears to carry me till I find my own again” and that it isn’t up to me to decide if my work is worthy, “you just write, the world decided whether it needs it or not.”

I think literature is very capable of both, but in a unique manner. While I often look to early queer poets’ disruptive work, or the kind of ruthless honesty of early disability poetry, I think I look most to my contemporaries, particularly Christopher Soto, to understand how politic and poetry can be one. His work never hides its agenda, but always carries with it purpose, humanity, and craft. And each supports the other, no one can claim a Loma poem is not beautifully crafted, but if you walk away from one without your political opinion at least shaken, and your heart a little extra filled with blood, I am convinced you read it with your eyes closed. His work enacts what I’ve been intimating to myself as the activism of empathy. I suppose the idea is this, how can you hate, want to destroy, that which you understand? As a disabled trans woman, my poetry must fight an uphill battle, moving me from monsterhood to personhood. And by extension, if I am no longer a monster, than perhaps those like me can be empathized with, and become less monstered too. Arguably, it’s a shaky proposition at best, but right now it’s what I have. 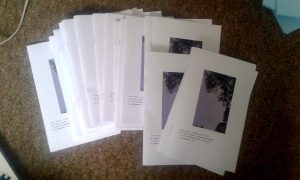 I decided to answer two of your questions together as one, because I think there is an element of performativity behind gender expression that intrinsically links the two. While I’m not exactly sure what this means, I like to believe that my work has a femme sensibility. That my poetry has better fitting chromosomes than I do. I think this is partially because I came up in a spoken word scene where loud masc poets were prioritized, and I don’t want my work to reflect that. I have a naturally deep voice, so when I think about a poem written to perform, I think of words divided into units of breath. And when I am raising the pitch of my voice for the stage it naturally foreshortens my breaths. I also think that more and more so as I write, I’m willing to write pieces which surrender to the demands of the page. Not everything I write is meant to be spoken. I think that among femme poets there are a lot of witches, and being raised by a witch (though I’m not one myself) I think a lot about poems as a form of magic, each poem a spell. Sometimes my poems are sigils, sometimes they demand to become incantations.

What do you think is the most significant impact social media has had on the poetry world recently?

For me the biggest thing it means is the capability to communicate with other poets around the globe, and for journals to share multi-national work that transcends petty nationalist borders. If it weren’t for social media I probably wouldn’t run a journal. I certainly wouldn’t have made the connections to such incredible poets, like Linette Reeman, who flew across the country to tour with me this last May. 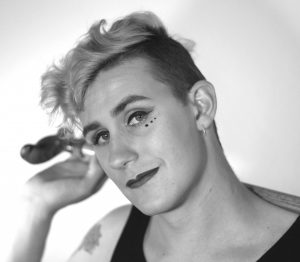 TORRIN A. GREATHOUSE (they/them or she/her pronouns) is a genderqueer, cripple-punk from Southern California. She is the Editor-in-Chief of Black Napkin Press. Their work is published or forthcoming in The Offing, Duende, Apogee, Frontier, Lunch Ticket, Assaracus, and Glass: Journal of Poetry. She is a 2016 Best New Poets, and Pushcart Prize nominee, and semifinalist for the Adroit Poetry Prize. torrin’s first chapbook, Therǝ is a Case That I Ɐm, is forthcoming from Damaged Goods Press in 2017. When they are not writing, their hobbies include pursuing a bachelors degree, awkwardly drinking coffee at parties, and trying to find some goddamn size 13 heels.