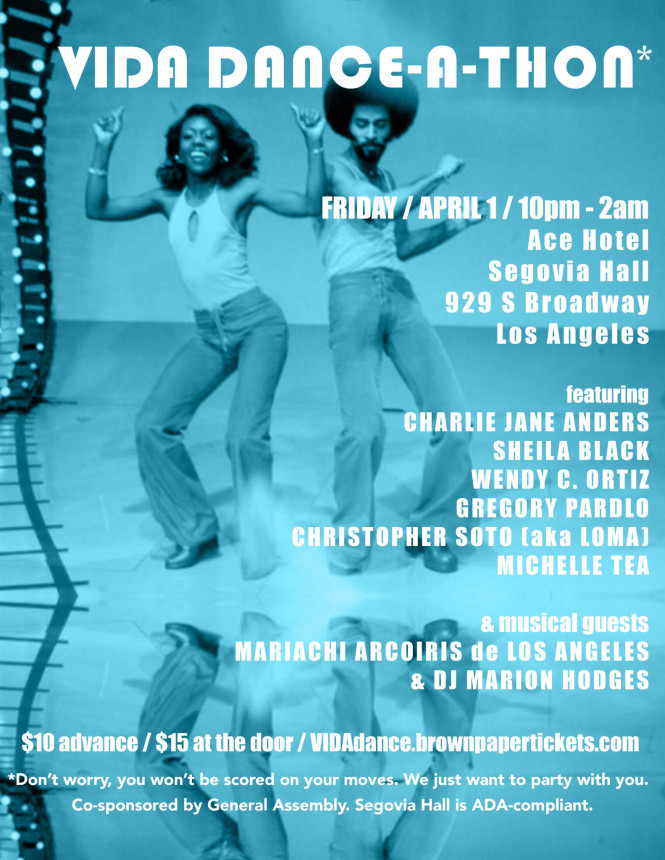 Don’t worry, it’s not a competition, we just want to have a good time! Come party with VIDA at our AWP offsite event, and support another year of amplifying women’s voices.

CHARLIE JANE ANDERS is the editor in chief of io9.com and the organizer of the Writers With Drinks reading series. Her stories have appeared in Asimov’s Science Fiction, The Magazine of Fantasy & Science Fiction,Tor.com, Lightspeed, Tin House, ZYZZYVA, and several anthologies. Her novelette “Six Months, Three Days” won a Hugo award, and her debut novel, All the Birds in the Sky, was published in January 2016 from Tor Books

SHEILA BLACK is the author of House of Bone, Love/Iraq and Wen Kroy (2014) winner of the Orphic Prize from Dream Horse Press. She co-edited with Jennifer Bartlett and Mike Northen Beauty is a Verb: The New Poetry of Disability (Cinco Puntos Press 2011),named a Notable Book for 2012 by the American Library Association (ALA). She lives in San Antonio where she directs Gemini Ink, a literary arts center.

WENDY C. ORTIZ is the author of Excavation: A Memoir (Future Tense Books, 2014), Hollywood Notebook (Writ Large Press, 2015), and Bruja (CCM, Oct. 2016). Her work has been profiled or featured in the Los Angeles Times, the Los Angeles Review of Books, The Rumpus, and the National Book Critics Circle Small Press Spotlight blog. Her writing has appeared in such places as The New York Times, Hazlitt, Vol. 1 Brooklyn, The Nervous Breakdown, and a year-long series appeared at McSweeney’s Internet Tendency. Wendy lives in Los Angeles.

GREGORY PARDLO‘s collection Digest (Four Way Books) won the 2015 Pulitzer Prize for Poetry. Digest was also shortlisted for the 2015 NAACP Image Award and was a finalist for the Hurston-Wright Legacy Award. His other honors include fellowships from the National Endowment for the Arts and the New York Foundation for the Arts; his first collection Totem was selected by Brenda Hillman for the APR/Honickman Prize in 2007. Pardlo’s poems appear in The Nation, Ploughshares, Tin House, The Norton Anthology of Contemporary African American Poetry,Best American Poetry, and elsewhere. Pardlo serves on the faculty of the M.F.A. program in creative writing at Rutgers University-Camden. He lives with his family in Brooklyn.

CHRISTOPHER SOTO (aka LOMA) is a queer latinx punk poet & prison abolitionist. They were named one of “Ten Up and Coming Latinx Poets You Need to Know” by Remezcla. They were named one of “Seven Trans and Gender Non-Conforming Artists Doing the Work” by The Offing. Poets & Writers will be honoring Christopher Soto with the “Barnes & Nobles Writer for Writers Award” in 2016. They founded Nepantla: A Journal Dedicated to Queer Poets of Color with the Lambda Literary Foundation. They cofounded The Undocupoets Campaign in 2015. Their poetry has been called political surrealist and focuses on domestic violence, queer youth homelessness, and mass incarceration. Their first chapbook “Sad Girl Poems” was published by Sibling Rivalry Press in 2016. They received an MFA in poetry from NYU, and their work has been translated into Spanish and Portuguese. Originally from the Los Angeles area; they now live in Brooklyn.

MICHELLE TEA is the author of five memoirs: The Passionate Mistakes and Intricate Corruption of One Girl in America, Valencia (now a film), The Chelsea Whistle, Rent Girl (illustrated), and most recently How to Grow Up (Penguin/Plume). Her novels include Mermaid in Chelsea Creek, the first in a Young Adult fantasy trilogy published by McSweeneys, and Rose of No Man’s Land; forthcoming works are Girl at the Bottom of the Sea, Castle on the River Vistula and the memoir-fiction hybrid Black Wave. Tea is the Founding Artistic Director of RADAR Productions, a queer-feminist literary non-profit organization that produces the monthly RADAR Reading Series at the San Francisco Public Library, the international Sister Spit performance tours, and many other events throughout the Bay Area and beyond. She is Editor of Sister Spit Books, an imprint of City Lights, and Creator of Mutha Magazine, an online publication about real-life parenting. Her writing has appeared in The Believer, n+1. Buzzfeed, The Bold Italic, Marie Clare, xoJane.com and many other print and web publications.

MARIACHI ARCOIRIS DE LOS ANGELES, the world’s first and only LGBTQ Mariachi, brings Mexican music and folklore to Southern California. They are a dynamic ensemble representing the traditions of a rich culture of Mexico. Mariachi Arcoiris de Los Angeles prides itself in providing its public with the utmost professionalism and musicianship. This unique ensemble was created as a safe haven for mariachi musicians who identify as LGBTQ to come together and perform traditional Mexican regional music in an otherwise “machista” and somewhat discriminating subculture of the mariachi world.

If you see live music in Los Angeles, you’ve probably seen MARION HODGES (KCRW The Lab, Sundays, 3-6am) — either in her role as a blogger, a show promoter, or just a die-hard music fan, she is a ubiquitous presence at venues throughout the city. Marion is currently the resident DJ for the triannual, pop up vintage clothing and accessory sale: A Current Affair. In the past she’s maintained residencies at La Cita in Downtown Los Angeles, Bronson Bar in Hollywood, and most recently one of Downtown L.A.’s most buzzed about new venues Ham & Eggs Tavern. Her latest venture involves being the DJ component of Radio Picture Show; a monthly Storytelling/DJ night (in the vein of the Moth) that features comedians, writers, actors, musicians and visual artists telling stories inspired a particular song or image. Marion has also written for several local music sites including Buzz Bands LA.