This Is Not About Your Understanding

You are here: Home / Archives / Featured / This Is Not About Your Understanding 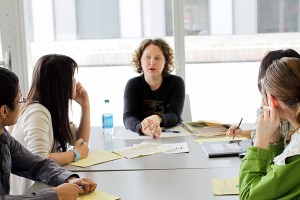 I wanted to share a few thoughts on how we[1] might use 2014 to curate, incite, extend and in every other way ignite more discussion by and about women of color in the literary arts. There are so many folks out there I read on a daily basis that I’d like to include, amplify and challenge on these issues.

The important thing to establish right out of the gate is that I am not implying that there is no commonality in the issues facing all women nor would I suggest we conflate all non-European descent women. Each population faces societal, cultural, ethnic, economic and other pressures. I celebrate you, go ‘head and tell me who you are. I need to know. I need you to tell me. So much of our culture is wrapped around values that I don’t hold, only partially hold, was socialized into or saw on television, sometimes I forget that those are not my issues. They are not my center. I know I’m not alone, and I know there are women out there who have already figured this out, are figuring it out, never had this issue. I want to know you. Contact me.

That said, it’s time we had a real chat about what the Hell is going on out here for women of color. What are the publication rates? Which outlets have created a publishing, editorial and aesthetic environment that promotes diversity? And I’m not talking about publishing formal couplets written by someone of non-European descent, I’m talking about the tough stuff: actually examining if the entire editorial culture—from the bottom up, because, yes, we all know most of of our work passes through the hands of readers least likely to have any experience—challenges itself on a regular basis, asks the best of itself and its editorial mission and publishing history, evolves its aesthetic criteria to continually expand the notions of “good”, “quality”, “literary” so that the TOC doesn’t look like it’s from an alternate universe where Ole Dixie won the war. How utterly, ridiculously enraging and heartbreaking is it to go back through six, eight and ten months worth of issues (in more than a few cases, years) and not see a single author of color. Or to only see the same ten authors/poets of color on repeat while every other name in the journal looks like it’s on shuffle. What are the statistical chances of that publication reading and accepting the work of any one of color, male or female?

Also: How hard is it to find full and tenure-track professors working in the creative arts who are female(-identified) and of non-European descent? How does this affect the aesthetic for the journals that publish at these institutions? What about admission? Recommenders and recommendees for fellowships and grants? Workshops offered, reading lists, book purchases, official invitations for readings on campus, the canon taught to emerging writers, readers and scholars? The attitude and tone of faculty meetings? When an environment lacks attention to cultural diversity, professional, mandated sensitivity training and attention to same, it can fall into the kind of club atmosphere in which difference is punished by negative social pressure. You don’t speak up because your “tone of voice” is always construed as hostile, too aggressive, not “friendly” enough. Your silence is taken as assent to whatever bias is running the table; you’re expected to carry every heavy moment to joy and laughter because you’re “so good at that”. In short, the nail that sticks up gets hammered.

It’s also time we drilled down from the basic discussion of the issues. For example, in what ways are different communities of women put at cross purposes with one another, i.e. the scarcity debate? This isn’t about bridge building across populations, let’s get the ugly stories out, the embarrassing stories, the stories we never talk about because they’re too controversial or might… make us actually see what we’re doing to one another. Right now. Then, we stop doing it. More is more. I refuse to allow a world to exist where I have to kill off another woman’s chances in order to have mine. Nope. Not gonna happen. Not on my watch. I’m also not going to sit back and let anyone else do it, either. We make more chances. We’re women. Nature equipped us for creation. Yep. I said it.

This is not about relativising (the old chestnut of “we all face these issues”). Of course gender is the overlapping circle in this special Hell of inequality we find ourselves in, but, it’s important to give space to each woman to declare her struggles without regard to how it might be similar to someone else’s. Let’s give ourselves a broad field of voices and concerns, make things explicit, fully empower and listen and invite folks to the discussion.

And everyone, of every ethnicity: If you’ve ever been in an argument with someone, a real, personal, painful, close-to-the-bone-oh-I-should-be-writing-this-not-living-it kind of horrible shitstorm, you know what I’m asking when I say we have to first listen without speaking, that active listening that’s taught in therapy and kindergarten. Words may be misspoken, angry feelings may arise, we may each feel offended and someone might actually snap and find her honest, true center and need you to sit next to her, quietly holding her hand, not nodding, or breathing, or speaking, or, even, affirming through your own shared experience, but rather just gifting her your presence, your listening heart, telling her those magic words, “I hear you”. This is not about your understanding. Understanding may take time, it may take forever, it may never happen, but in this place and right now, we can hear one another, and that can be a beautiful kind of sisterhood all on its own.

Alyss Dixson received a BA in Comparative Literature from Yale after a brief stint at Columbia University’s MFA in Film, she left for Hollywood. She ran Rat Entertainment for five years working on Rush Hour, Family Man, Paid in Full and as an Associate Producer on Double Take. Later, she joined Paramount Pictures as Vice President of Production, Worldwide. Ms. Dixson is a Cave Canem Fellow, a Callaloo Fellow in Poetry and serves on the Executive Committee for VIDA: Women in Literary Arts’ Board of Directors. She is hard at work on her thesis novel, Deep Rollers, for San Francisco State University’s MFA in Fiction as well as a collection of poems, Fukuoka Woman.

[1] By “we”, I mean those of us here at VIDA, i.e. me, not the world at large. Women of Color have hardly been waiting by demurely for me to hit “send” on anything before they speak up for themselves.