Body of a Poem: Genrequeer and Genderqueer in Alabama

You are here: Home / Archives / Featured / Body of a Poem: Genrequeer and Genderqueer in Alabama

Most of the jokes I hear about Alabama from my Northern liberal friends have nothing to do with the gorgeous, fierce resistance that I see here on the daily, nothing to do with the Kudzu Coalition organizing to put pressure on our senator to show up and do his job, to do with my friends spending weekends escorting at the abortion clinic, to do with the trans women in Birmingham organizing to raise money for a center. With the powerful Black churches and civil rights movements. The erasure of these narratives consigns the state to the closet of America, pretending it isn’t there.

As a non-binary trans/genderqueer/queer leftie, I moved to Alabama half-expecting to die. At the MFA students’ weekend, I probed everyone I talked to about queer friendliness and safety in the South. At a backyard party, I asked the same question to a student smoking a cigarette and flicking the ash into the campfire. She leaned over her aviator eyeglasses and assured me that in addition to the many queer-identified students, the program’s approach to genre delineations was “genrefluid” and “genrequeer.” To some extent, this assertion proved  true: many people in the MFA program and one of our faculty members identify as queer (and everyone, I think, identifies as Lacroix-obsessed). To my knowledge, there are no openly binary trans members of the faculty at the University of Alabama, let alone any non-binary faculty—a lack of representation that needs to be an institutional priority.

As the current fiction editor of Black Warrior Review, I imagine that most of our readers have no idea what the physical space—where the magic happens—looks like. Our office represents my safest space on campus, with its floral couch and soft blankets and full bookshelves and endless steaming tea. Torrential spring rain pours from a spout outside the window. We share a building with the departments of theatre and music, so during editorial meetings we overhear a shouted bit of dialogue and strains of ethereal song. In this welcoming, femme space, I feel loved. I retreated here after another MFA student used trans slurs in class. Most members of the board are members of the LGBTQ+ community, and here we make visible the voices of a resistance that is not necessarily in the streets. It is a vulnerable, by which I mean emotionally-open, present, and loving resistance.

Don’t misunderstand me. Alabama, the university, and America: they’re all fucked up. I deal with transphobia so often that I recently committed to donating to Trans Lifeline each time, to have a constructive place to direct my anger. When I dialogue with someone who’s said something transphobic, they usually pull away. (Sometimes, rage-texting isn’t enough.) We need better mechanisms for engaging with various forms of oppression in university writing programs and in the literary world. Relying on Title IX offices and HR—both of which mostly exist to protect the institution from lawsuits—is not enough. We need accountability through a cooperation-oriented judicial process that prioritizes the emotions and rights of the people impacted.

Resistance here exists, too, in raging group texts full of MFA students, angry and processing. Making brutal jokes at the expense of a recent visiting writer who was, quite frankly, a total asshole; of strategizing how to make changes. We held a forum last August for writers in the program to dialogue about what we see as the issues on race, gender, and sexuality within workshop environments, which is the first step toward improvements. (The next step would be actual, demonstrable, concrete steps taken by the program administration, all of whom are good, kind people).

My professor for a course on race and fantastical literature urged us to think about our fears of violence, including death, as being like the weather. We can wear a raincoat, but we have little control over the rain. I’m trying to do this, to move forward in the world, to drive through rural Alabama without fear, to go to bars at night. Recently, when a university medical provider enacted transphobic and homophobic interpersonal violence against both myself and a friend, we texted endlessly about her horrid capri pants (Golden tassels! Beige plaid! Embroidery!) and resolved that the silver lining of our experiences with her was our commitment to resistance.

What this looks like, in the MFA: we teach our students, mostly from rural, conservative Alabama households, about intersectional queer narratives. About how our stories are not only important and normal, but that they will be the subject of Wednesday’s quiz. We petition the registrar to get new pronouns added to the school’s system. We visit our senators’ offices and put their constituent officers on speed-dial. We support and love each other in the face of all of this. We organize. We write super queer love stories and we celebrate those stories. We celebrate ourselves. 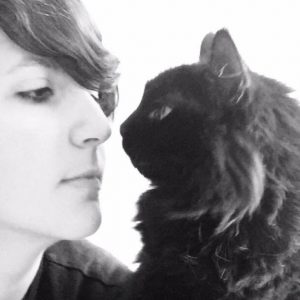 EMRYS DONALDSON is a Graduate Council Fellow at the University of Alabama and the fiction editor at Black Warrior Review. Their work has appeared in Necessary Fiction.